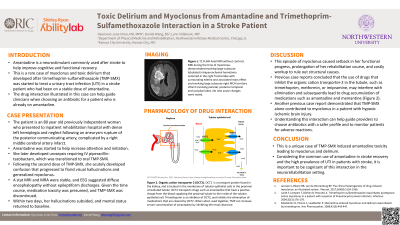 Case Diagnosis: Amantadine and trimethoprim-sulfamethoxazole interaction leading to toxic delirium and myoclonus in a stroke patient


She later developed urosepsis requiring IV piperacillin-tazobactam, which was transitioned to oral TMP-SMX. Following the second dose of TMP-SMX, she acutely developed confusion that progressed to florid visual hallucinations and generalized myoclonus. A stat MRI and MRA were stable, and EEG suggested diffuse encephalopathy without epileptiform activity.

Given the time course, medication toxicity was presumed. TMP-SMX was discontinued. Within two days, her hallucinations subsided and mental status returned to baseline.

Discussions: Amantadine is a neurostimulant commonly used after stroke and brain injury to help improve cognitive and functional recovery. This is a rare case of myoclonus and toxic delirium that developed after TMP-SMX was started to treat a urinary tract infection (UTI) in a stroke patient who had been on a stable dose of amantadine.

Pharmacologically, amantadine and TMP use the same cation transporter. TMP causes serum accumulation of amantadine by decreasing the renal excretion of amantadine. The patient's symptoms described here are also seen in amantadine toxicity. This drug interaction can help guide clinicians when choosing antibiotics for older stroke patients who are already on amantadine.

Conclusions: This is the first reported case of TMP-SMX induced amantadine toxicity leading to myoclonus and delirium. This episode caused functional setback and prolonged her rehabilitation course, in addition to costly workup to evaluate for structural causes. Given the common use of amantadine in stroke recovery and the high prevalence of UTI in these patients, it is important to be cognizant of this interaction in the neurorehabilitation setting.