Risk of seizure with use of donepezil for cognitive recovery in TBI: a case report 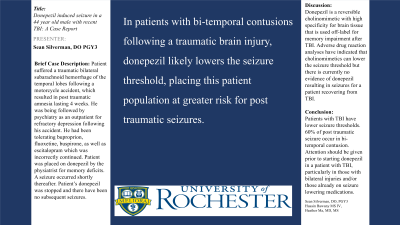 Case Diagnosis: He was noted to be incontinent of bowel/bladder and disoriented for 30 minutes. He was diagnosed clinically with a generalized seizure. His donepezil was stopped. He has not had subsequent seizures.

Case Description: Patient admitted to acute inpatient rehabilitation for bilateral temporal subarachnoid hemorrhages sustained after a motorcycle crash.  Baseline GCS of 8. Post traumatic amnesia duration of 4 weeks. Patient eventually discharged home. He was placed on buproprion, fluoxetine, and buspirone for difficult-to-treat depression. Retrospectively, it was discovered the patient was incorrectly taking escitalopram concomitantly, but was tolerating combination of these medications.  At a later outpatient visit he was started on daily donepezil for his persistent memory deficits. One month after starting donepezil he was brought to the ED for altered mental status.

Discussions: Donepezil is a reversible cholinomimetic with high specificity for brain tissue, and is used off-label to improve memory after TBI. Adverse drug reaction analyses have indicated that individually, neuroleptics, antidepressants, and cholinomimetic drugs can lower the seizure threshold. However, this patient never had a post-traumatic seizure despite taking a combination of buproprion, fluoxetine, escitalopram. Instead, he experienced his first seizure after donepezil was added. While there is no evidence of donepezil causing seizures in patients recovering from TBIs, it may have been a contributing factor in a patient with bilateral temporal lobe damage who was incorrectly taking three antidepressants.

Conclusions: Patients with TBIs have lower seizure thresholds, with 75-80% of post-traumatic seizures occurring within the first 2 years. 60% of those have biparietal contusions or dural penetration. While cholinergic medications can help improve memory, a common deficit after TBI, attention must be made to drug-drug interactions that can further lower the seizure threshold in this already at-risk population.  Furthermore, attention should be given to assure appropriate medication reconciliation in patients whose cognitive deficits may cause unsafe medication adherence.