21-year-old female with Lance-Adams Syndrome after anoxic brain injury complicated by sciatic nerve palsy due to positioning while comatose. 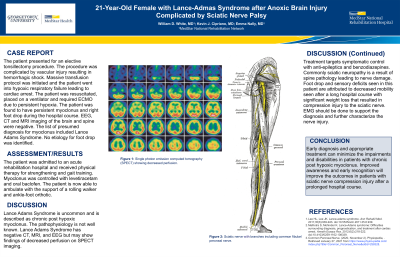 Case Description: A 21-year-old previously healthy female presented for elective tonsillectomy procedure that was complicated by vascular injury resulting in hemorrhagic shock, respiratory failure, and cardiac arrest. Patient was resuscitated, intubated, and required ECMO due to hypoxia. She was comatose for 13 days. Upon awakening, patient was found to have myoclonus consistent with Lance-Adams Syndrome. Manual motor muscle testing revealed 0/5 right dorsiflexion and long toe extension, and 1/5 plantar flexion. She had absent sensation over sensory innervation of the sciatic nerve. Sensation was intact over right medial calf. Hamstring and patellar reflexes were intact bilaterally. Achilles reflex intact over left ankle and absent on the right. EEG and MRI imaging of brain and spine were negative. A multidisciplinary approach was initiated to improve mobility and self-care. Myoclonus improved with levetiracetam and baclofen. Upon discharge, she was able to ambulate with the support of a rolling walker and ankle foot orthotic.

Discussions: Lance-Adams Syndrome is a rare complication of anoxic brain injury. The pathophysiology is not well known however this patient had improvement in symptoms with levetiracetam and baclofen. Other medications commonly used are clonazepam and valproate. In addition, the sciatic nerve palsy likely resulted from external rotation of the greater trochanter resulting in pressure on the sciatic nerve. An EMG will be done to support the diagnosis and further characterize the nerve injury.

Conclusions: This case highlights two important topics for physiatrists. Early diagnosis and treatment can minimize the impairments and disabilities in patients with Lance-Adams Syndrome. In addition, the role for the physiatrist in the ICU setting includes proper positioning to prevent sciatic nerve compression injuries.