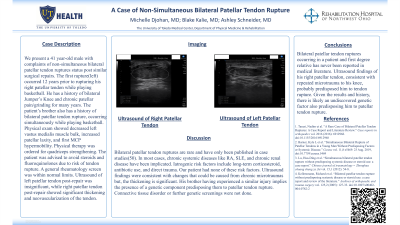 Discussions: Bilateral patellar tendon ruptures are rare and have only been published in case studies(50). In most cases, chronic systemic diseases like RA, SLE, and chronic renal disease have been implicated. Iatrogenic risk factors include long-term corticosteroid, antibiotic use, and direct trauma. Our patient had none of these risk factors. Ultrasound findings were consistent with changes that could be caused from chronic microtraumas but, the thickening is significant. His brother having experienced a similar injury implies the presence of a genetic component predisposing them to patellar tendon rupture. Connective tissue disorder or further genetic screenings were not done.