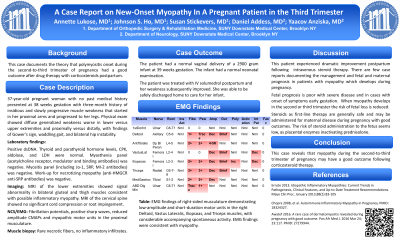 Discussions: This patient with new-onset myopathy experienced dramatic improvement postpartum following  intravenous steroid therapy. There are few case reports documenting the management and fetal and maternal prognosis in patients with myopathy which develops during pregnancy.
Fetal prognosis is poor with severe disease and in cases with onset of symptoms early in the course of gestation.  When myopathy develops in the second or third trimester the risk of fetal loss is reduced.

Steroids as first-line therapy are generally safe and may be administered for maternal disease during pregnancy with good outcomes. The risk of steroid administration to the fetus seems low, as placental enzymes inactivating prednisolone decrease the fetal steroid blood concentration to 10% of the mother’s blood concentrations.

Conclusions: Our case reveals that myopathy during the second-to-third trimester of pregnancy may have a good outcome following corticosteroid therapy.