A Pain in the Neck: A Carotid Body Mass Presenting as Traumatic Axial Neck Pain 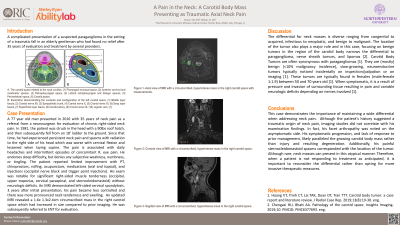 Case Description: A 77 year old man presented with 35 years of neck pain that started after he fell from a ladder.  Since that time, he had experienced persistent neck pain and spasms with radiation to the right side of his head which was worse with cervical flexion and lessened when laying supine. His exam was notable for significant right-sided muscle tenderness without neurologic deficits. An MRI demonstrated left-sided cervical spondylosis. The patient reported limited improvement with PT, medications, and injections (occipital nerve block and trigger point injections). 3 years after initial presentation, his pain became less controlled and there was more pronounced neck tenderness and swelling.  An updated MRI revealed a 1.6x1.3x2.4cm circumscribed mass in the right carotid space which had increased in size compared to prior imaging.

Discussions: The differential for neck masses is diverse, but focusing on benign tumors in the region of the carotid body narrows the differential to paraganglioma, nerve sheath tumors, and lipomas. Carotid body tumors are often synonymous with paragangliomas. They are generally benign, slow-growing, neuroendocrine tumors in females aged 50-70 years-old. Symptoms are due to pressure and invasion of surrounding tissue often resulting in neck pain and various neurologic deficits, depending on nerve involvement.

Conclusions: This case demonstrates the importance of maintaining a wide differential when addressing neck pain.  Although the patient’s history suggested a traumatic origin of neck pain, imaging studies did not correlate with his examination findings. His symptomatic progression, and lack of response to prior management, likely paralleled the growing carotid body mass. Additionally, his painful sternocleidomastoid spasms corresponded with the location of the tumor.