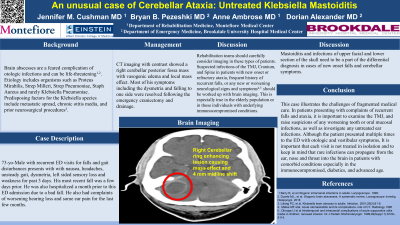 A 73-yo-male presented to the Emergency-Department with nausea, headaches, dysmetria, left sensory and motor deficits, and with worsening unsteady gait for 3 days. This-patient had multiple ED admissions for similar presentation which included recurrent falls, dizziness, and worsening hearing-loss. During this recent hospital admission, a CT-scan revealed a right cerebellar posterior fossa abscess with vasogenic-edema and 4mm-midline-shift. He immediately underwent  emergency-craniectomy to relieve the mass-effect and drain the purulence. Post-surgery, his dysmetria, and the tendency to fall to one side improved. However, he required inpatient-rehabilitation to restore his other deficits and work on re-gaining his baseline-function.

This patient was seen on multiple hospital-admissions for symptoms-suggestive of a pathology of otologic origin. Due to low suspicion, his abscess was not discovered until his dysmetria and neurological-changes became severe enough leading to further MRI-imaging. The delay in treating his mastoiditis led to cerebellar-abscess formation with prolonged-suffering and the need for craniectomy. It is critical that the differential-diagnosis include infections of the mastoid and inner ear and diagnose these infections earlier, before abscess-formation and the need for emergent cerebellar resection.


Conclusions: Rehabilitation physicians often treat patients presenting with falls, dizziness, and disorders that are vestibular in nature.  It is important when treating a patient with worsening cerebellar signs of imbalance and falls to consider this diagnosis in their work-up. This case highlights the rare-complications of untreated chronic-otitis-media and mastoiditis secondary to a Klebsiella-infection.