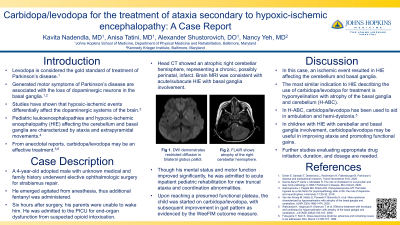 Case Description: A 4-year-old adopted male with unknown medical and family history underwent elective ophthalmologic surgery for strabismus repair. Six hours after surgery, his parents were unable to wake him. He was admitted to the PICU for end-organ dysfunction from suspected opioid intoxication. Head CT showed an atrophic right cerebellar hemisphere, representing a chronic infarct. Brain MRI was consistent with acute/subacute HIE with basal ganglia involvement. Though his mental status and motor function improved significantly, he was admitted to acute inpatient pediatric rehabilitation for new truncal ataxia and coordination abnormalities. Upon reaching a presumed functional plateau, the child was started on carbidopa/levodopa, with subsequent improvement in gait pattern as evidenced by the WeeFIM outcome measure.

Discussions: To the best of our knowledge, this is the first case report describing carbidopa/levodopa use for the treatment of ataxia secondary to HIE. The most similar indication described is hypomyelination with atrophy of the basal ganglia and cerebellum (H-ABC). Carbidopa/levodopa has been used to aid in ambulation and hemi-dystonia in these patients. In our case, the insult was due to an ischemic event resulting in anoxic brain injury. As dosing guidelines were limited, we started carbidopa/levodopa 0.25 tab AM, PM (approximately levodopa 3 mg/kg/day) and titrated to tolerance to 0.5 tab AM, PM (approximately levodopa 6 mg/kg/day). WeeFIM score for ambulation improved from minimal assistance on admission to supervision to modified independent upon discharge. Of note, WeeFIM scores were not done prior to addition of carbidopa/levodopa due to logistical time constraints of the pediatric rehabilitation facility.

Conclusions: In children with HIE with cerebellar and basal ganglia involvement, carbidopa/levodopa may be useful in improving ataxia and promoting functional gains. Further studies evaluating appropriate drug initiation, duration, and dosage are required.