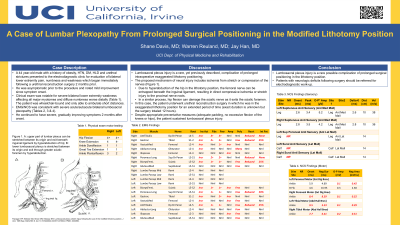 Case Description: A 44 year old male with a history of obesity, HTN, DM, HLD and urethral strictures presented to the electrodiagnostic clinic for evaluation of bilateral lower extremity pain, numbness and weakness which began immediately following a urethral reconstruction surgery 2 months prior. He was asymptomatic prior to the procedure and noted mild improvement since symptom onset. Clinical exam was notable for severe bilateral lower extremity weakness affecting all major myotomes and diffuse numbness worse distally. The patient was wheelchair-bound and only able to ambulate short distances. EMG/NCS was consistent with severe acute/subacute bilateral lumbosacral plexopathy.

Discussions: Lumbosacral plexus injury is a rare, yet previously described, complication of prolonged intraoperative exaggerated lithotomy positioning. The proposed mechanism of neural injury includes ischemia from stretch or compression of the nerves. Due to hyperabduction of the hip in the lithotomy position, the femoral nerve can be entrapped beneath the inguinal ligament, resulting in direct compressive ischemia or stretch injury to the proximal nerve roots. In a similar process, hip flexion can damage the sciatic nerve as it exits the sciatic foramen.
In this case, the patient underwent urethral reconstruction surgery in which he was in the exaggerated lithotomy position for an extended period of time (exact duration is unknown but the surgery totaled 12 hours). Despite appropriate preventative measures (adequate padding, no excessive flexion of the knees or hips), the patient sustained lumbosacral plexus injury. He continued to have severe, gradually improving symptoms 2 months after onset.

Conclusions: Lumbosacral plexus injury is a rare possible complication of prolonged surgical positioning in the lithotomy position. Patients with neurologic deficits following surgery should be referred for electrodiagnostic work-up.