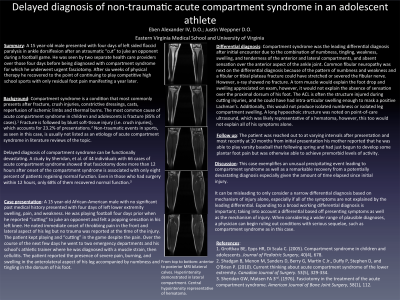 Case Description: A 15 year-old male with no significant past medical history presented with four days of left lower extremity swelling and pain. He was playing football four days prior when he reported “cutting” to juke an opponent and felt a popping sensation in his left knee accompanied by throbbing pain in the anterolateral aspect of his leg. Over the course of the next few days he went to two emergency departments where he was diagnosed with a muscle strain and then cellulitis. The patient reported pain, burning, and swelling in the anterolateral aspect of his leg accompanied by numbness and tingling in the dorsum of his foot.

A study by Sheridan, et al. showed that fasciotomy done more than 12 hours after onset of acute compartment syndrome is associated with only eight percent of patients regaining normal function, yet this patient was able to go back to competing at varsity level athletics.

Conclusions: Common mechanisms often trigger us to think of a subsequent disease. It is imperative to keep in mind a broad differential; one that encompasses the most common disease, a disease that would explain the full presentation with one pathology, secondary diagnoses for concomitant symptoms, and emergent or irreversible pathologies. Lastly, no matter how many health care providers a patient has been to, it is crucial to be systematic and think critically.