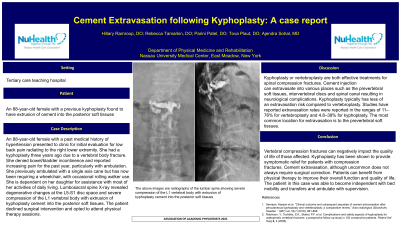 Case Diagnosis: An 88-year-old female with a previous kyphoplasty found to have extrusion of cement into the posterior soft tissues

Case Description: An 88-year-old female with a past medical history of hypertension presented to clinic for initial evaluation for low back pain radiating to the right lower extremity. She had a kyphoplasty three years ago due to a vertebral body fracture. She denied bowel/bladder incontinence and reported increasing pain for the past year, particularly with ambulation. She previously ambulated with a single axis cane but has now been requiring a wheelchair, with occasional rolling walker use. She is dependent on her daughter for assistance with most of her activities of daily living. Lumbosacral spine X-ray revealed degenerative changes at the L5-S1 disc space and severe compression of the L1 vertebral body with extrusion of kyphoplasty cement into the posterior soft tissues. The patient declined surgical intervention and opted to attend physical therapy sessions.

Conclusions: Vertebral compression fractures can negatively impact the quality of life of those affected. Kyphoplasty has been shown to provide symptomatic relief for patients with compression fractures. Cement extravasation, although uncommon does not always require surgical correction. Patients can benefit from physical therapy to improve their overall function and quality of life. The patient in this case was able to become independent with bed mobility and transfers and ambulate with supervision.