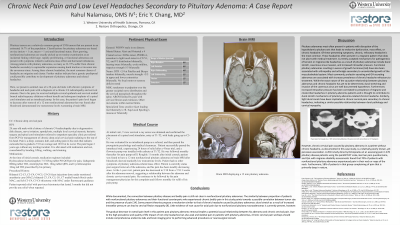 Case Diagnosis: We present a case of a 28-year-old male with chronic headaches and neck pain with chronic C4 radiculopathy, cervical stenosis, and prior bariatric surgery. Due to his pain, he received multiple cervical interventions including epidurals and medial branch ablations without benefit and subsequent implants of a spinal cord stimulator and an intrathecal pump. He reported relief with radiofrequency ablations in the past but none when repeated. Pain was dull, constant chronic axial neck pain radiating to the top of his head 7-10/10 in severity. The pain began 2 years prior without any inciting incident. Pain alleviated with medication and rest, and was exacerbated by bending, walking, lifting, walking, and straining.

Case Description: Physical therapy was trialed without benefit. He presented to us on a regiment including hydrocodone/oxycodone, gabapentin, amitriptyline, and cyclobenzaprine in relatively high doses. Patient had previously consulted with multiple spine surgeons and was deemed a nonsurgical candidate for cervical decompression.

Conclusions: He was referred for an intrathecal pump and experienced 24 hours of relief after a trial. A Flowonix pump was installed and the patient was followed monthly. 11 months after initial consult, a 12 mm nonfunctional pituitary adenoma was seen on brain MRI after bloodwork showed markedly low testosterone levels. Patient had no other symptoms of pituitary adenoma-related mass effect. Post-surgical removal of the adenoma his pain decreased to 5/10 at 1 year visit, 3 weeks after his adenoma removal.