Conservative treatment of scapulothoracic crepitus due to elastofibroma dorsi: a case report 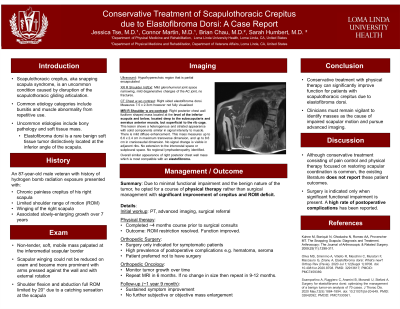 Case Description: An 87-year-old male veteran presented with chronic painless crepitus of his right scapula, limited shoulder range of motion (ROM), winging of the right scapula, and an associated slowly-enlarging growth over 7 years. On exam, a non-tender, soft, immobile mass was palpated at the inferomedial scapular border. Scapular winging was more prominent with arms pressed against the wall and with external rotation. Full shoulder flexion and abduction was limited by 20° due to a catching sensation at the scapula. MRI showed a 9.0 x 2.0 cm right posterior chest wall mass consistent with elastofibroma dorsi. Patient was referred to and evaluated by orthopedic surgery. Due to minimal functional impairment and the benign nature of the tumor, he opted for a course of physical therapy rather than surgical management with significant improvement of crepitus and ROM deficit.

Discussions: Scapulothoracic crepitus, also known as snapping scapula syndrome, is an uncommon condition caused by disruption of the gliding articulation between the anterior scapula and posterior chest wall. Common etiologies include scapular dyskinesis, a pericapsular lesion, or bursitis from repetitive use. We present an uncommon case of scapulothoracic crepitus secondary to elastofibroma dorsi, a benign soft tissue tumor in the infrascapular region. Although conservative treatment consisting of pain control and physical therapy focused on restoring scapular coordination is common, the existing literature does not report these patient outcomes. Surgery is indicated only when significant functional impairment is present as a high rate of postoperative complications has been reported.

Conclusions: Based on this case, conservative treatment with physical therapy can significantly improve function for patients with scapulothoracic crepitus due to elastofibroma dorsi. Clinicians must remain vigilant to identify masses as the cause of impaired scapular motion and pursue diagnostic testing to determine the type of lesion before implementation of a comprehensive physiatric care plan.