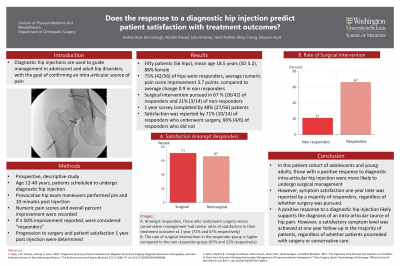 Objectives: Diagnostic hip injections are increasingly used to guide management decisions for adolescents and young adults with hip conditions, with the goal of confirming an intra-articular source of pain. This study describes patients’ treatment paths and subsequent satisfaction in the context of their response to a diagnostic hip injection.

Conclusions: In this cohort of adolescents and young adults with hip pain, those with a positive response to diagnostic intra-articular hip injection were more likely to undergo surgical management than non-responders. However, symptom satisfaction one year later was reported by a majority of responders, regardless of whether surgery was pursued. Therefore, confirmation of intra-articular hip pain may not necessarily suggest that surgery is required to achieve satisfactory symptomatic improvement.