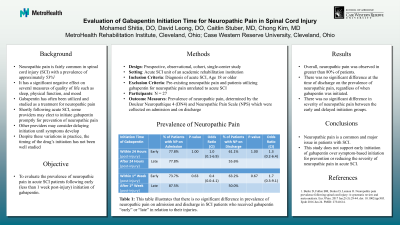 Objectives: Neuropathic pain (NP) is common in spinal cord injury (SCI) with a prevalence of approximately 53%. Additionally, NP has a significant negative effect on several measures of quality of life such as sleep, physical function, and mood. Gabapentin has often been utilized and studied as a treatment for NP; however, the timing of its initiation has not been well studied. Shortly following acute SCI, some providers may elect to initiate gabapentin promptly for prevention of NP whereas other providers delay initiation until symptoms develop. This study evaluates the prevalence of NP in acute SCI patients following early (less than 1 week post-injury) initiation of gabapentin.

Design: Prospective, observational, cohort, single-center study. All patients admitted to the acute SCI unit of an academic rehabilitation institution were screened. Those presenting with an acute SCI were considered for inclusion. Patients with pre-existing NP and patients utilizing gabapentin for NP unrelated to acute SCI were excluded. Patient information that was collected included age, sex, race, type of SCI, pain scores, and gabapentin dose. Douleur Neuropathique 4 (DN4) and neuropathic pain scale (NPS) results were collected on admission and on discharge.

Results: 37 patients were initially enrolled. 27 patients completed the study and were ultimately included. Overall, NP was observed in greater than 80% of all patients. In addition, there was no significant difference at the time of discharge on the prevalence of NP, regardless of when gabapentin was initiated. Finally, no significant difference was detected in severity of NP between the early and delayed initiation cohorts.

Conclusions: NP is a common and major issue in patients with SCI. Gabapentin has shown some promise in the treatment of NP in SCI. However, this study does not support early initiation of gabapentin over symptom-based initiation for prevention or reducing the severity of NP in acute SCI.