Evaluation of kinesiophobia in survivors of major burn injury 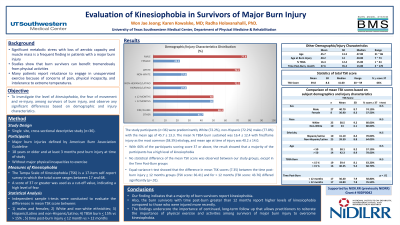 Objectives: Significant metabolic stress with loss of aerobic capacity and muscle mass is a frequent finding in patients with a major burn injury. Patients are reluctant to engage in unsupervised exercise because of concerns of pain, physical incapacity, and intolerance to extreme temperatures. The objective of this study was to investigate kinesiophobia among burn injury patients.

Design: This is a single site, cross-sectional study (n=36) conducted in a regional burn center. Data were collected from burn injury survivors who were 18 years of age or older, and at least 3 months post injury. The level of kinesiophobia was measure using the Tampa Scale of Kinesiophobia (TSK), a 17-item self-report survey. The total score ranges between 17 and 68, and a score of 37 or greater was used as a cut-off value. The statistical significance of the mean TSK scores differences based on demographics and injury characteristics was evaluated by independent sample t-test (p< .05).

Results: Sixty-six percent of subjects reported high levels of kinesiophobia (score 37 or above). The mean TSK scores among different sex, race, ethnicity, age, total body surface area (TBSA) burn, and time post-burn were compared. Except for time post-burn injury, none of the mean differences were statistically significant. Interestingly, participants who were injured more than 12 months ago showed higher levels of kinesiophobia than those who were injured within 12 months with a mean TSK score difference of 7.35 (p=.01).

Conclusions: Our finding indicates that a majority of burn survivors report kinesiophobia. The association of kinesiophobia and post injury time is a significant finding that may help in designing appropriate exercise intervention programs to overcome such fear. The findings underscore the importance of continued, long-term follow up that allows practitioners to reiterate the importance of physical exercise and activities among survivors of major burn injury.