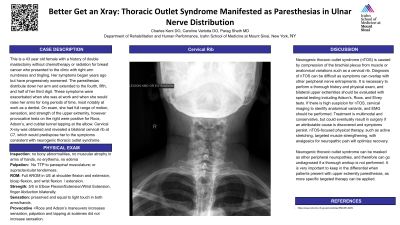 Case Description: This is a 43 year old female with a history of double mastectomy without chemotherapy or radiation for breast cancer who presented to the clinic with right arm numbness and tingling. Her symptoms began years ago but progressively worsened. The paresthesias distributed to the fourth, fifth, and half of her third digit and were exacerbated while at work as a dentist. On exam, she had full range of motion, sensation, and strength of the upper extremity, however provocative tests on the right were positive for Roos, Adson’s, and cubital tunnel tapping. Cervical X-ray was obtained and revealed a bilateral cervical rib at C7, which would predispose her to the symptoms consistent with neurogenic thoracic outlet syndrome.

Discussions: Neurogenic thoracic outlet syndrome (nTOS) is caused by compression of the brachial plexus from muscle or anatomical variations such as a cervical rib. Diagnosis of nTOS can be difficult as symptoms can overlap with other peripheral nerve entrapments. It is necessary to perform a thorough history and physical exam, and bilateral upper extremities should be evaluated with special testing including Adson’s, Roos, and Elvey tests. If there is high suspicion for nTOS, cervical imaging to identify anatomical variants, and EMG should be performed. Treatment is multimodal and conservative, but could eventually result in surgery if an attributable cause is discovered and symptoms persist. nTOS-focused physical therapy, such as active stretching, targeted muscle strengthening, with analgesics for neuropathic pain will optimize recovery.

Conclusions: Neurogenic thoracic outlet syndrome can be masked as other peripheral neuropathies, and therefore can go undiagnosed if a thorough workup is not performed. It is very important to keep in the differential when patients present with upper extremity paresthesias, as more specific targeted therapy can be applied.