Find the fracture: A case of an occult proximal humerus fracture in a patient with Duchenne muscular dystrophy 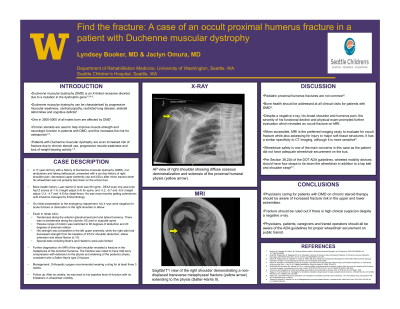 Case Description: A 17-year-old boy with a history of Duchenne muscular dystrophy (DMD), non ambulatory, presented with a six-day history of right shoulder pain, decreased upper extremity use and ADLs after his wheelchair not properly tied down on the school bus. In the emergency department, his X rays were negative for acute fracture or dislocation in the right shoulder or elbow. Exam in rehab clinic was pertinent for tenderness along the anterior shoulder and lateral humerus, passive range of motion and strength evaluation was limited due to pain. An MRI was significant for fracture in the metaphysis of the proximal humerus consistent with a Salter-Harris type 2 fracture. Orthopedics recommended wearing a sling for at least three weeks. After six weeks, he was back to his baseline level of function with no limitations in wheelchair mobility.

Discussions: Patients with Duchenne muscular dystrophy are at an increased risk of fracture due to chronic steroid use and immobility. Despite a negative X-ray, his broad shoulder and humerus pain, the severity of his functional decline and physical exam prompted further evaluation which revealed a fracture. One of the main concerns of this case is the mechanism of injury in the setting of improper wheelchair tie down. Per the Americans with Disabilities Act (ADA), wheeled mobility devices should have four straps to tie down the wheelchair in addition to a lap belt and shoulder strap.

Conclusions: Physicians caring for patients with DMD on chronic steroid therapy should be aware of increased fracture risk in the upper and lower extremities. Fracture should be ruled out if there is high clinical suspicion despite a negative x-ray. Physicians, patients, caregivers and transit operators should all be aware of the ADA guidelines for proper wheelchair securement on public transit.