Guillain-Barre Syndrome During Pregnancy: A Rare Presentation of the Axonal Variant 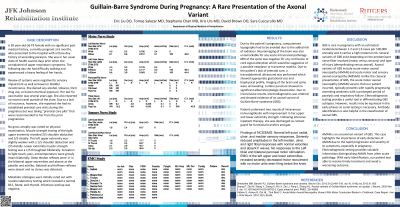 Case Description: Our patient is a 30-year-old G6 P5 female with no significant past medical history, currently pregnant at 6 months, who presented with a three-day history of ascending paralysis. She was in her usual state of health several days prior when she complained of upper respiratory symptoms. The following day she had difficulty walking and experienced a heavy feeling of her hands. She denied changes in sensation, bowel or bladder incontinence. Imaging of the brain and spine were unrevealing. Lumbar puncture showed no significant albuminocytologic dissociation. Electrodiagnostics was performed and showed evidence of an axonal variant of Guillain-Barre syndrome (GBS). Patient underwent two rounds of intravenous immunoglobulin with improvement in her upper and lower extremity strength. Following intensive inpatient therapy, she was discharged as contact guard for functional transfers and gait.

Discussions: GBS is rare in pregnancy with an estimated incidence between 1.2 and 1.9 cases per 100,000 annually and it carries a high maternal risk. Unlike the classical presentation of GBS, the acute motor axonal neuropathy (AMAN) variant, that our patient incurred, typically presents with rapidly progressing ascending weakness with a prolonged period of paralysis and respiratory failure. Electrodiagnostic testing provide a useful tool in differentiating GBS subtypes. However, results may be equivocal in the early phases so serial testing is necessary. Antibody identification is also helpful in the classification of axonal GBS.

Conclusions: AMAN is an uncommon variant of GBS. This case highlights the importance of early detection of AMAN due to the rapid progression and severity of its symptoms, especially in pregnancy. Electrodiagnostic testing provides valuable information distinguishing AMAN from other acute pathology. With early identification, our patient was able to receive timely treatment and avoid a worsening outcome.