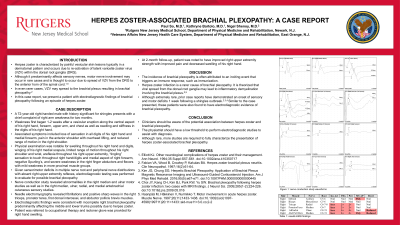 Discussions: The incidence of brachial plexitis is often attributed to an inciting event that triggers an immune response, such as with vaccination. Local herpes zoster infection represents a rarer cause of brachial plexopathy as presented in this case. Although the pathophysiology remains unclear, it is theorized that viral spread from the dorsal root ganglia may lead to inflammatory demyelination involving the brachial plexus.

Conclusions: Although rare, clinicians should be aware of the potential association between herpes zoster infection and brachial plexopathy. The physiatrist should have a low threshold to perform electrodiagnostic studies to assist in the diagnosis.