Hodgkin Lymphoma-Induced Autoimmune Encephalitis in a Child: A Case Report 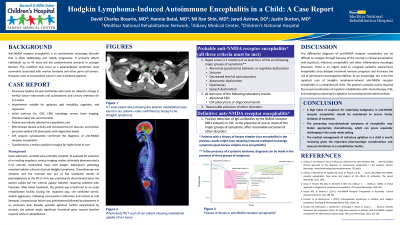 Case Description: The patient presented with new-onset oral automatisms, altered mental status, and urinary retention. She was initially referred to a psychiatric unit then transferred to a tertiary pediatric hospital. Upon admission, steroids were initiated due to clinical presentation consistent with autoimmune encephalitis. CSF analysis subsequently confirmed the diagnosis of anti-NMDA receptor encephalitis. She was then transferred to the PICU for plasmapheresis, which was prematurely discontinued due to severe agitation requiring sedation with dexmedetomidine. Chest CT demonstrated a 5 cm anterior mediastinal mass, and subsequent pathology revealed nodular sclerosis classical Hodgkin lymphoma. Chemotherapy was then initiated. After 3 weeks of treatment, the patient was transferred to an acute rehabilitation facility. During her inpatient stay, she experienced an episode of violent aggression after receiving prednisone along with her chemotherapy. Due to unsuccessful redirection and refusal of oral medication, two doses of intramuscular lorazepam were administered, followed by placement in an enclosure bed.

Conclusions: A high index of suspicion for underlying malignancy should be maintained in anti-NMDA receptor encephalitis to ensure timely treatment initiation. Given the essential treatment of both cancer and encephalitis, management requires fine-tuned coordination, contingency planning, and resource allocation. The presenting neurobehavioral symptoms of encephalitis may hinder appropriate chemotherapy, which can prove especially challenging in the acute rehab setting. Furthermore, the medical management of refractory agitation in a child is worth reviewing given the important pharmacological considerations and resource limitations in a rehabilitation facility.