Hypotonia or Spasticity? A 2-year-old male with hereditary spastic paraplegia. 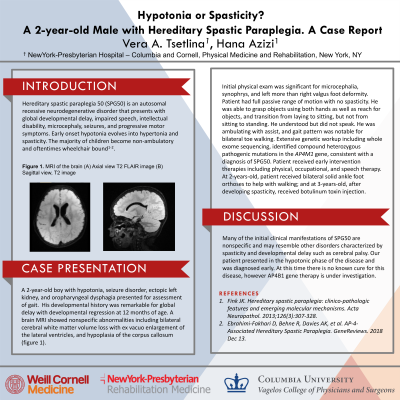 Case Description: A 2-year-old boy with hypotonia, seizure disorder, ectopic left kidney, and oropharyngeal dysphagia presented for assessment of gait.  His developmental history was remarkable for global delay with developmental regression at 12 months of age. A brain MRI showed nonspecific abnormalities including bilateral cerebral white matter volume loss with ex vacuo enlargement of the lateral ventricles, and hypoplasia of the corpus callosum. Physical exam was notable for microcephalia, synophrys, and foot valgus deformity. Patient had full passive range of motion with no spasticity. He was able to grasp objects using both hands as well as reach for objects, and transition from laying to sitting, but not from sitting to standing. He understood but did not speak. He was ambulating with assist, gait pattern notable for bilateral toe walking and mild planovalgus on the left more than right. Patient was casted for bilateral solid ankle foot orthoses.

Conclusions: Many of the initial clinical manifestations of SPG50 are nonspecific and may resemble other disorders characterized by spasticity and developmental delay such as cerebral palsy. Our patient presented in the hypotonic phase of the disease and was diagnosed early. He receives early intervention therapies including physical, occupational, and speech therapy. At this time there is no known cure for this disease, however AP4B1 gene therapy is under investigation.