Impact of Tamsulosin on Urinary Retention in Patients with Neuromuscular Scoliosis 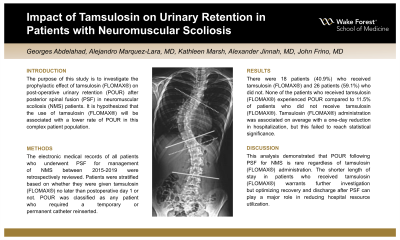 Objectives: The purpose of this study is to investigate the prophylactic effect of tamsulosin (FLOMAX®) on urinary retention (UR) after posterior spinal fusion (PSF) in neuromuscular scoliosis (NMS) patients. It is hypothesized that the use of tamsulosin (FLOMAX®) will be associated with a lower rate of UR in this complex patient population.

Design: The electronic medical records of all patients who underwent PSF for management of NMS between 2015-2019 were retrospectively reviewed. Patients older than 18 years and younger than 10 years, those who had revision surgery or patients with congenital scoliosis were excluded. Patients were stratified based on whether they were given tamsulosin (FLOMAX®) no later than postoperative day 1 or not. Categorical and continuous variables were analyzed with student T-test and Fischer’s exact analysis.