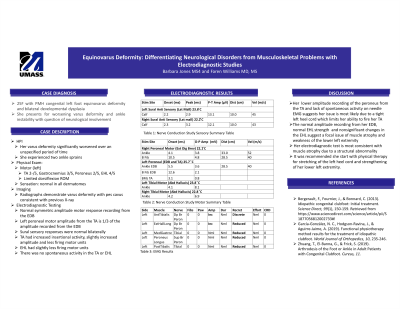 Case Description: Because of the above problems and several ankle sprains physiatry was consulted. Her physical exam was positive for tight left heel cord, limited range of motion, and strength as follows: DF 2-/5, eversion 2/5, PF 3/5, extensor hallicus longus (EHL) 4/5. Radiographs revealed varus deformity with pes cavus, unchanged from prior exams.
Electrodiagnostic testing performed by physiatry detected symmetrical, normal amplitude peroneal motor responses when recording from the EDB’s but peroneal motor amplitude recording from the left tibialis anterior (TA) 1/3 that from the EDB. Tibial motor and sural sensory responses were normal on both sides. On needle EMG the TA had increased insertional activity, slightly increased amplitude, with less firing motor units. Tibialis anterior and EHL had no spontaneous activity and normal recruitment. All other muscles studied on needle EMG were relatively normal.

Discussions: The lower amplitude recording from the tibialis anterior but normal amplitude from the EDB without significant needle EMG changes suggests a problem secondary to muscle atrophy rather than a nerve problem. Her tight left heel cord limits her ability to fire the tibialis anterior, causing muscle atrophy over time.
The etiology of muscle weakness and instability in this case is more likely due to an atrophic left lower extremity which may be from a congenital structural abnormality. Literature shows a stepwise approach to treatment includes consideration for physical therapy to stretch the left heel cord, strengthening of the lower extremity, and patient education. The patient opted for this approach instead of surgery.

Conclusions: This case illustrates the value of electrodiagnosis in differentiating nerve problems from musculoskeletal pathology. Having an accurate diagnosis should result in more effective, less invasive treatment for the patient.