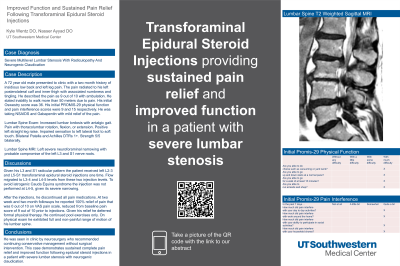 Case Description: A 72 year old male presented to clinic with a two month history of insidious low back and left leg pain. The pain radiated to his left posterolateral calf and inner thigh with associated numbness and tingling. He described the pain as 9 out of 10 with ambulation. He stated inability to walk more than 50 meters due to pain. His initial Oswestry score was 36. His initial PROMIS-29 physical function and pain interference scores were 9 and 15 respectively. He was taking NSAIDS and Gabapentin with mild relief of the pain.

Discussions: Given his L3 and S1 radicular pattern the patient received left L2-3 and L5-S1 transforaminal epidural steroid injections. Flow was anticipated to migrate to L3-4 and L4-5 from these two levels that were injected. To avoid iatrogenic Cauda Equina syndrome the injection was not performed at L4-5 given its severe narrowing.

After the injections, he discontinued all pain medications. Two months later he reported his pain as 0 out of 10 in severity at rest and with activity. He had continued pool exercises only. His range of motion of the lumbar spine and functional mobility improved to near baseline.

Conclusions: He was seen in clinic by neurosurgery who recommended continuing conservative management without surgical intervention. This case demonstrates sustained complete pain relief and improved function following epidural steroid injections in a patient with severe lumbar stenosis with neurogenic claudication.