Inpatient rehabilitation of a patient with acute methanol toxicity 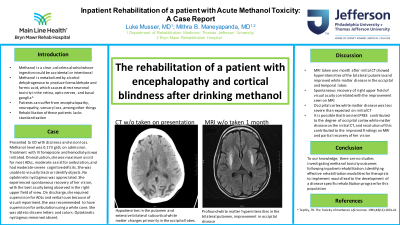 Case Diagnosis: A 40 yo woman who suffered methanol toxicity after ingesting hand sanitizer.

Case Description: She presented to the ED with dizziness and vision loss. Shortly thereafter, she became altered and underwent emergent intubation for airway protection. Methanol level was 0.173 g/dL on admission. Treatment with IV fomepizole and hemodialysis was initiated. Head CT revealed bilateral symmetric hypodensities in the putamen and extensive bilateral subcortical white matter changes primarily in the occipital lobes. On evaluation, she was maximum assist for most ADLs, moderate assist for ambulation, and had moderate-severe cognitive deficits. She was unable to visually track or identify objects. No optokinetic nystagmus was appreciated. She experienced spontaneous recovery of her vision, with the best acuity being observed in the right upper field of view. On discharge, she was supervision for ADLs requiring verbal cues because of visual impairment, and supervision for ambulation with a white cane.  She was able to discern letters and colors. Optokinetic nystagmus remained absent.

Discussions: MRI taken one month after initial CT showed abnormal signal within the bilateral putamina and improved white matter disease in the occipital and temporal lobes. Spontaneous recovery of right upper field visual acuity correlated with the improvement seen on MRI. Occipital cortex white matter disease was less severe than expected on the MRI when compared to the initial CT. It is possible that transient PRES contributed to the degree of occipital cortex white matter disease on the initial CT, with resolution leading to the improved findings on MRI and partial recovery of her vision. To our knowledge, there are no studies investigating methanol toxicity outcomes in inpatient rehabilitation. Identifying effective rehabilitation modalities for therapists to implement would lead to the development of a disease specific rehabilitation program for this population.