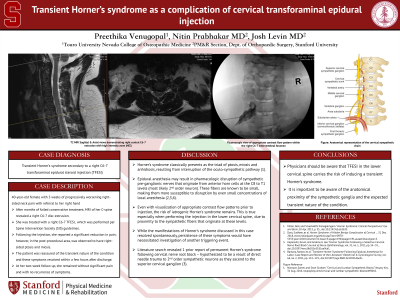 Case Description: We present the case of a 40-year-old woman with right C7 radicular pain. After two months of failed conservative treatments, an MRI of the cervical spine revealed a right C6-7 disc extrusion. She was treated with a right C6-7 TFESI, performed per Spine Intervention Society guidelines. Following the injection, she reported a significant decrease in pain; however, in the post-procedural area, she was observed to have right-sided ptosis and miosis. The patient was reassured of the transient nature of the condition, and the symptoms resolved within a few hours after discharge. She remained without significant pain and with no recurrence of symptoms at her two-week follow-up.

Conclusions: Physicians should be aware that TFESI in the lower cervical spine carries the risk of inducing a transient Horner’s syndrome. It is important to be aware of the anatomical proximity of the sympathetic ganglia and the expected transient nature of the condition.