Ischemic Stroke in the Setting of Facioscapulohumeral Muscular Dystrophy (FSHD): A Case Report 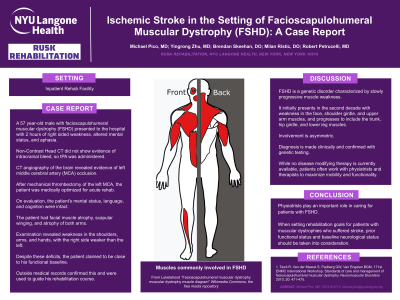 Case Description: A 57 year old male with facioscapulohumeral muscular dystrophy (FSHD) presented to the hospital with 2 hours of right sided weakness, altered mental status, and aphasia. Non-contrast head computed tomography did not show evidence of intracranial bleed, so tissue plasminogen activator was administered. CT angiography of the brain revealed evidence of left middle cerebral artery (MCA) occlusion. After mechanical thrombectomy of the left MCA, the patient was medically optimized for acute rehab. On evaluation, the patient's mental status, language, and cognition were intact. The patient had facial muscle atrophy, scapular winging, and atrophy of both arms. Examination revealed weakness in the shoulders, arms, and hands, with the right side weaker than the left. Despite these deficits, the patient claimed to be close to his functional baseline. Outside medical records confirmed this and were used to guide his rehabilitation course.

Discussions: FSHD is a genetic disorder characterized by slowly progressive muscle weakness. It initially presents in the second decade with weakness in the face, shoulder girdle, and upper arm muscles, and progresses to include the trunk, hip girdle, and lower leg muscles. Involvement is asymmetric. Diagnosis is made clinically and confirmed with genetic testing. While no disease modifying therapy is currently available, patients often work with physiatrists and therapists to maximize mobility and functionality.

Conclusions: Physiatrists play an important role in caring for patients with FSHD. When setting rehabilitation goals for patients with muscular dystrophies who have suffered from a stroke, prior functional status and baseline neurological status should be taken into consideration.