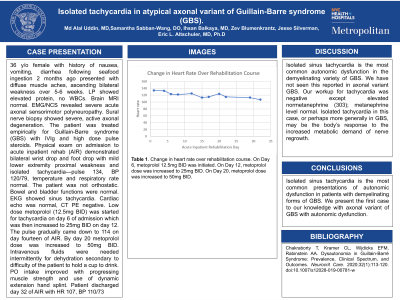 Discussions: Low dose metoprolol (12.5mg BID) was started for tachycardia which was then increased to 25mg BID. The pulse gradually came down to 114 on day fourteen of AIP. Intravenous fluids were needed intermittently for dehydration secondary to difficulty of the patient to hold a cup to drink. PO intake improved with progressing muscle strength and use of dynamic extension hand splint. Patient discharged day 32 of AIR with HR 107, BP 110/73.  Isolated sinus tachycardia is the most common autonomic dysfunction in the demyelinating variety of GBS. We have not seen this reported in axonal variant GBS. Our workup for tachycardia was negative except elevated normetanephrine (303); metanephrine level normal. Isolated tachycardia in this case, or perhaps more generally in GBS, may be the body’s response to the increased metabolic demand of nerve regrowth.