Low Back Pain Secondary to a Duodenal Ulcer 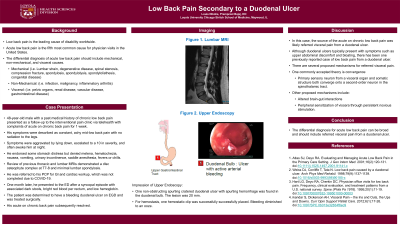 Case Description: 48-year-old male with a past medical history of chronic low back pain presented as a follow-up to the interventional pain clinic via telehealth. His symptoms were described as constant, achy mid-low back pain both with no radiation to the legs. Symptoms were aggravated by lying down, escalated to a 10 in severity, and often awoke him at night. He endorsed some stomach distress but denied bowel or bladder changes. Review of previous thoracic and lumbar MRIs demonstrated a disc osteophyte complex at T7-8 and minimal lumbar spondylosis. He was referred to his PCP for GI and cardiac workup, which was not completed due to COVID-19. One month later, he presented to the ED after a syncopal episode with associated dark stools, bright red blood per rectum, and low hemoglobin. The patient was determined to have a bleeding duodenal ulcer and treated surgically. His acute on chronic back pain subsequently resolved.

Discussions: The differential diagnosis of acute low back pain should include mechanical, non-mechanical, and visceral causes. In this case, the source of the acute on chronic low back pain was most likely referred visceral pain from a duodenal ulcer.  Although duodenal ulcers typically present with symptoms such as upper abdominal discomfort and bloating, there has been one previously reported case of low back pain from a duodenal ulcer. There are several proposed mechanisms for referred visceral pain. One commonly accepted theory is convergence, where the primary sensory neuron from a visceral organ and somatic structure both converge onto a second-order neuron in the spinothalamic tract. Other proposed mechanisms include altered brain-gut interactions, and peripheral sensitization of viscera through persistent noxious stimulation.

Conclusions: The differential diagnosis for acute low back pain can be broad and should include referred visceral pain from a duodenal ulcer.