Medial Elbow Pain in the Overhead Athlete – Ulnar Collateral Ligament sprain vs. Ulnar Neuritis? Or Both?: A Case Report 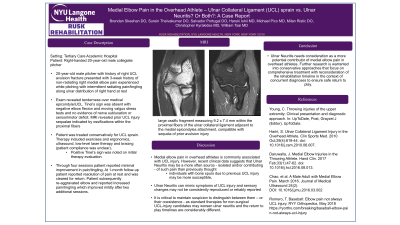 Discussions: Medial elbow pain in overhead athletes is commonly associated with UCL injury. However, recent clinical data suggests that ulnar neuritis may be a more often source – isolated or contributing - than previously thought and individuals with bone spurs due to previous UCL injury may be more susceptible. Ulnar neuritis can mimic symptoms of UCL injury and sensory changes may not be consistently reproduced or reliably reported. It is critical to maintain suspicion to distinguish between them – or their coexistence - as standard therapy approaches for UCL injury may worsen ulnar neuritis and the return to play timelines are considerably different.

Conclusions: Ulnar neuritis needs consideration as a more potential contributor of medial elbow pain in overhead athletes. Further research is warranted into conservative approaches that focus on comprehensive treatment with reconsideration of the rehabilitation timeline in the context of concurrent diagnoses to ensure safe return to play.