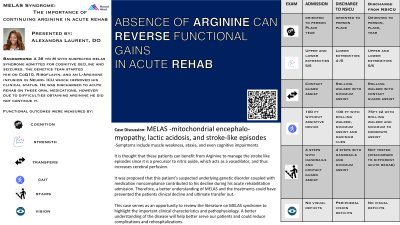 A 38 year old male with a history of suspected MELAS syndrome develops impairments in cognition, balance and coordination while on the acute rehab unit and is transferred to the Neuro-ICU for continued workup and L-Arginine drip.

Prior to rehab the patient had multiple ED visits for cognitive decline and seizures. On this most recent hospitalization he was followed closely with the genetics team who started him on CoQ10, Riboflavin, and transferred him to the Neuro-ICU for an L-Arginine infusion, which ultimately improved his clinical status. He was discharged to acute rehab on these oral medications, however due to difficulties obtaining Arginine he did not continue it. During his rehab stay, his Berg balance score declined, he developed gait impairments and cognitive decline. It was proposed that the lack of Arginine precipitated this, and he was transferred back to the Neuro-ICU for repeat L-Arginine infusion, which again improved his symptoms.

Discussions: MELAS (Mitochondrial encephalo-myopathy, lactic acidosis, and stroke-like episodes) is a genetic disorder that affects the brain, nervous system and muscles. Symptoms include muscle weakness, ataxia, and even cognitive impairments. It is thought that these patients can benefit from Arginine to manage the stroke like episodes since it is a precursor to nitric oxide, which acts as a vasodilator, and thus increases cerebral perfusion. It was proposed that this patient’s suspected underlying genetic disorder coupled with medication noncompliance contributed to his decline during his acute rehabilitation admission. Therefore, a better understanding of MELAS and the treatments could have prevented the patients clinical decline and ultimate transfer out.

Conclusions: This case serves as an opportunity to review the literature on MELAS syndrome to highlight the important clinical characteristics and pathophysiology. A better understanding of the disease will help better serve our patients and could reduce complications and rehospitalizations.