Morel-Lavallée Lesion: A Rare Presentation of a Traumatic Closed Degloving Injury in the Inpatient Rehab Setting 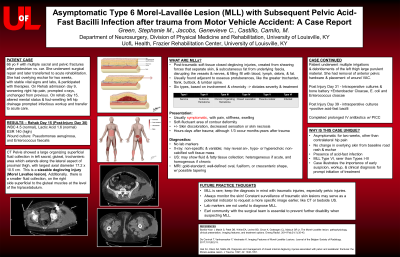 Case Description: We describe a 66 yo white female transferred to an inpatient rehab unit after being pinned by a vehicle in her driveway. The event resulted in severe pelvic ring fracture requiring surgical repair.  A degloving injury was noted over her left greater trochanter on admission to rehabilitation.  On day 15 of her stay, she complained of right thigh pain and therapy noticed a functional decline. An X-ray was obtained, which demonstrated her reduced pelvic ring fracture but no other lesions. Vital signs and labs remained unremarkable throughout. Later in the week, significant left lower extremity edema was noted along with suppuration from her degloving injury. A magnetic resonance imaging (MRI) of hip and pelvis demonstrated an extensive collection of purulent fluid between the subcutaneous fat and fascia over her left hip. The patient was transferred to acute care due to the deterioration of her mental status.

Conclusions: The Morel-Lavallée lesion is a rare closed degloving injury seen mostly in trauma victims wherein skin and subcutaneous tissue becomes separated from underlying fascia. Early detection of this lesion, specifically by MRI, is critical to prevent complications.  Local inflammation during the acute stages of Morel-Lavallée injuries can rapidly progress to pseudocapsule formation, which typically requires surgical intervention. Rehabilitation physicians caring for polytrauma patients, particularly with pelvic fractures, should have a high level of suspicion of this type of lesion presenting with non-convincing clinical findings where a prompt MRI would be required for appropriate diagnosis.