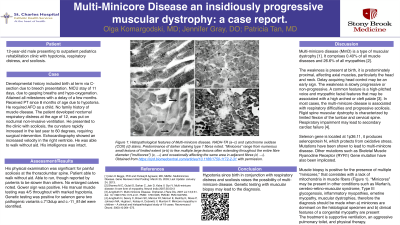 Case Description: 12-year-old male with hypotonia, respiratory distress, and scoliosis. Developmental history included birth at term via C-section due to breech presentation. NICU stay of 11 days, due to gasping breaths and hypo-oxygenation. Attained all milestones with a delay of a few months. Received PT since 8 months of age due to hypotonia. He required AFO as a child. No family history of muscle disease. The patient developed nocturnal respiratory distress at the age of 12, was put on nocturnal non-invasive ventilation. He presented to the clinic with scoliosis, the curvature rapidly increased in the last year to 60 degrees, requiring surgical intervention. Echocardiography showed an increased velocity in the right ventricle. He was able to walk without aid. His intelligence was intact. His physical examination was significant for painful scoliosis at the thoracolumbar spine. Gower sign was positive. His manual muscle testing was 4/5 throughout.

Discussions: Genetic testing was positive for selenon gene two pathogenic variants c.713dup and c.-11_81del were identified. Selenon gene is located at 1p36.11, it produces selenoprotein N, which protects from oxidative stress. Mutations have been shown to lead to multi-minicore disease. Multi-minicore disease (MmD) is a type of muscular dystrophy [1]. The weakness is present at birth, it is predominately proximal, slowly or non-progressive. In most cases, it is associated with respiratory difficulties and scoliosis. Rigid spine muscular dystrophy is characterized by limited flexion of the lumbar and cervical spine. Respiratory impairment may lead to secondary cardiac failure [2]. Muscle biopsy is positive for the presence of multiple "minicores," that correlates with a lack of mitochondria in muscle fibers. The treatment is supportive ventilation, aggressive pulmonary toilet, and physical therapy.

Conclusions: Hypotonia since birth in conjunction with respiratory distress and scoliosis raises the possibility of multi-minicore disease. Genetic testing with muscular biopsy may lead to the diagnosis.