Multimodal management of pain in a young sickle cell patient: A Case Study 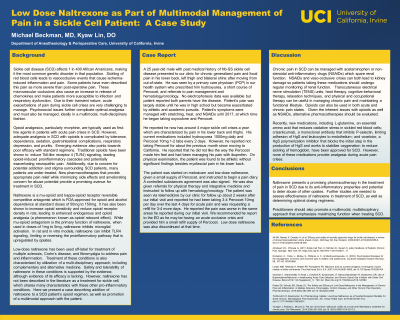 Case Diagnosis: In sickle cell disease, sickling of red blood cells leads to vasoocclusive events that cause ischemia-induced inflammation and pain. Due to their transient nature, pain control is difficult.  Psychosocial issues further complicate optimal analgesia. Opioid analgesics can be used as first-line agents however, they are associated with many side effects.

Case Description: 25 year-old male with past medical history of Hb-SS sickle cell disease presented to our clinic for chronic generalized pain and focal pain in his lower back, left thigh and bilateral shins. Patient’s pain was largely stable until he was in high school but became exacerbated by athletic and academic pursuits.  Patient’s symptoms were managed with stretching, heat, and NSAIDs until 2017, at which time he began taking opioids.
He reported he now has around 4 major sickle cell crises a year and are characterized by pain in his lower back and thighs.  His current medications included hydroxyurea 1000mg daily and Percocet 10mg 1-2 tabs every 2 days.  On physical examination, the patient was found to be very athletic without any significant findings besides myofascial pain in his lower back.

Discussions: Low-dose naltrexone has been used off-label for treatment of  fibromyalgia to address pain (Patten 2018).  Treatment requires a multi-disciplinary approach.  Safety and tolerability of naltrexone is supported by the evidence. However, naltrexone has not been described in the literature as a treatment for sickle cell.  Here we present a case describing addition of naltrexone to a SCD patient’s opioid regimen, as well as promotion of a multimodal approach with the patient.

Conclusions: Chronic pain management for SCD is challenging. Opioids can also be used in both acute and chronic pain states.  Given the inherent issues with opioids as well as NSAIDs, alternative pharmacotherapies should be evaluated. Practitioners should also promote a multi-modal, multidisciplinary approach which emphasizes maximizing function.