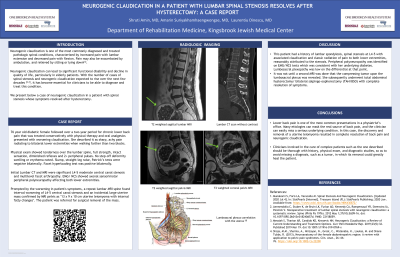 
Discussions: This patient had a history of lumbar spinal stenosis at L4-5 with associated claudication and classic radiation of pain to both lower extremities, reasonably attributed to the stenosis. Peripheral polyneuropathy was identified on EMG/NCS tests which was consistent with her underlying diabetes. Lumbosacral plexopathy was low on the differential at that point. It was not until a second MRI was done that the compressing tumor upon the lumbosacral plexus was revealed. She subsequently underwent TAH/BSO with complete resolution of symptoms.

Conclusions: Lower back pain is one of the most common presentations in a physiatrist’s office. Many etiologies can mask the real source of back pain, and the clinician can easily miss a serious underlying condition. In this case, the discovery and removal of a uterine leiomyoma resulted in complete resolution of back pain and neurogenic claudication.