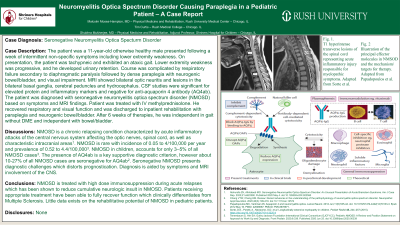 Case Description: The patient was a 11-year-old otherwise healthy male presented following a week of intermittent non-specific symptoms including lower extremity weakness. On presentation, the patient was tachypneic and exhibited an ataxic gait. Lower extremity weakness was progressive, and he developed urinary retention. Course was complicated by respiratory failure secondary to diaphragmatic paralysis followed by dense paraplegia with neurogenic bowel/bladder, and visual impairment.
MRI showed bilateral optic neuritis and lesions in the bilateral basal ganglia, cerebral peduncles and hydrocephalus. CSF studies were significant for elevated protein and inflammatory markers and negative for anti-aquaporin 4 antibody (AQ4ab). The patient was diagnosed with seronegative neuromyelitis optica spectrum disorder (NMOSD) based on symptoms and MRI findings.
Patient was treated with IV methylprednisolone. He recovered respiratory and visual function and was discharged to inpatient rehabilitation with paraplegia and neurogenic bowel/bladder. After 6 weeks of therapies he was independent in gait without DME and independent with bowel/bladder

Discussions: NMOSD is a chronic relapsing condition characterized by acute inflammatory attacks of the central nervous system affecting the optic nerves, spinal cord, as well as characteristic intracranial areas.
NMOSD is rare with incidence of 0.05 to 4/100,000 per year and prevalence of 0.52 to 4.4/100,000. NMOSD in children, accounts for only 3–5% of all NMOSD cases.
The presence of AQ4ab is a key supportive diagnostic criterion, however about 10-27% of all NMOSD cases are seronegative for AQ4ab. Seronegative NMOSD presents diagnostic challenges which distorts prognostication. Diagnosis is aided by symptoms and MRI involvement of the CNS.

Conclusions: NMOSD is treated with high dose immunosuppression during acute relapses which has been shown to reduce cumulative neurologic insult in NMOSD. Patients receiving appropriate treatment have been able to fully recover function which clinically differentiates from Multiple Sclerosis. Little data exists on the rehabilitative potential of NMOSD in pediatric patients.