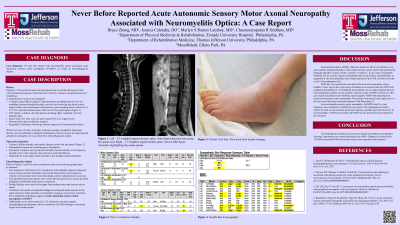 Case Description: A 29 year old woman presented with acute on chronic scotoma vision loss with progressive lower limb weakness and paresthesia. MRI revealed T2 hyper-intensities involving the dorsal central spinal cord extending from the cervical medullary junction through T12, with asymmetric extension into the cauda equina. Cerebrospinal fluid studies were notable for elevated protein consisting of alpha 1 globulin, albumin, and IgG. She was diagnosed with neuromyelitis optica (NMO). She was subsequently admitted to inpatient rehabilitation for spinal cord injury based therapies. While in rehabilitation, her weakness appeared inconsistent with her imaging, and she was referred for electrodiagnostic studies to assess for superimposed peripheral neuropathy.

Discussions: In the electrodiagnostic laboratory, the patient's examination revealed cachexia, diffuse atrophy, and trophic changes on her feet and hands. She had diminished sensation in a stocking-glove distribution. She had symmetric weakness more pronounced distally than proximally. Her lower limbs were more involved than her upper limbs. She was hyper-reflexive in her upper limbs but mute in her Achilles bilaterally.

Her electrodiagnostic studies revealed a motor and sensory axon loss peripheral polyneuropathy involving all extremities. She had no sympathetic response in the lower extremities. The constellation of polyneuropathy and cauda equina involvement suggested an acute autonomic sensory motor axonal neuropathy (AASMN) which was superimposed on her neuromyelitis optica. NMO has very rarely been associated with axon loss neuropathy. Only a handful of cases have been previously described. One case described remarkable improvement after initiation of rituximab. AASMN itself is extremely rare and has only recently been described in the literature.

Conclusions: Electrodiagnostic studies are necessary to diagnose peripheral neuropathies that may superimpose on central pathologies like NMO. Diagnosis of specifically AASMN associated NMO has not previously been reported in the literature.