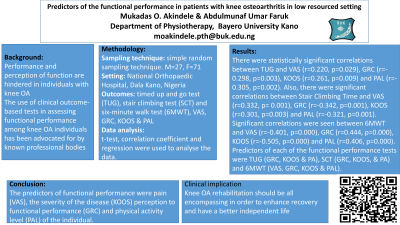 Objectives: The functional performance and perception of function of the lower limbs and general function is considered of great importance in the management of patients with knee Osteoarthritis (OA). The purpose of this study was to determine the how PA level, sedentary life, and clinical presentation predict functional performance in patients diagnosed with knee OA.