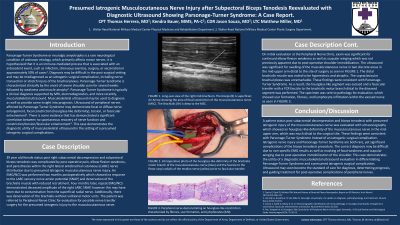 Discussions: On initial evaluation at the Peripheral Nerve Clinic, the ultrasound was significant for swelling of the musculocutaneous nerve in two discrete areas in the mid-upper arm distal to the site of surgery. The distal brachialis muscle was noted to be hyperechoic and atrophic. The supraclavicular brachial plexus was unremarkable. These findings were consistent with Parsonage-Turner Syndrome. As a result, the hourglass-like segment was excised and a fascicular transfer with a FCR fascicle to the brachialis motor branch distal to the diseased segment was performed. The specimen was sent to pathology for evaluation.
A patient status post subacromial decompression and biceps tenodesis with presumed iatrogenic injury of the musculocutaneous nerve was evaluated with ultrasonography which showed an hourglass-like deformity of the musculocutaneous nerve in the mid-forearm, which was much distal to the surgical site. These findings were consistent with Parsonage-Turner Syndrome instead of an iatrogenic surgical complication.

Conclusions: Iatrogenic nerve injury is a rare, yet significant complication of the biceps tenodesis procedure. This case demonstrates the utility of a diagnostic ultrasound evaluation in differentiating Parsonage-Turner Syndrome and a presumed iatrogenic surgical complication.