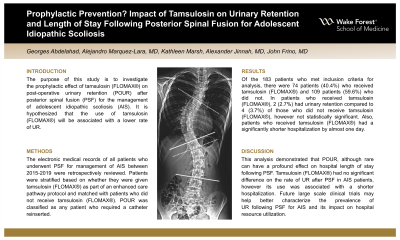 Design: The electronic medical records of all patients who underwent PSF for management of AIS between 2015-2019 were retrospectively reviewed. Patients were stratified based on whether they were given tamsulosin (FLOMAX®) as part of an enhanced care pathway protocol and matched with patients who did not receive tamsulosin (FLOMAX®). Categorical variables were utilized using Chi-square analysis and continuous variables were compared using Student t-test.

Conclusions: This analysis demonstrated that UR, although rare can have a profound effect on hospital length of stay following PSF. Tamsulosin (FLOMAX®) had no significant difference on the rate of UR after PSF in AIS patients, however its use was associated with a shorter hospitalization.