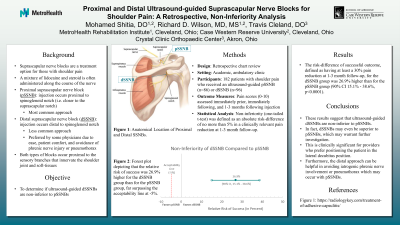 Objectives: Suprascapular nerve blocks are a treatment option for those with shoulder pain. The proximal suprascapular nerve block (pSSNB) approach, where a mixture of anesthetic and steroid is administered proximal to the spinoglenoid notch, is the approach regularly described in the literature; however, the distal suprascapular nerve block (dSSNB) approach is preferred by some physicians due to ease of the procedure, patient comfort, and avoidance of iatrogenic phrenic nerve injury or pneumothorax. Theoretically, dSSNBs should be as effective as pSSNBs because both blocks occur proximal to the sensory branches that innervate the shoulder joint and soft-tissues. The primary aim of this study is to determine if ultrasound-guided dSSNBs are non-inferior to pSSNBs.

Design: A retrospective chart review was performed on 225 patients with shoulder pain who received an ultrasound-guided SSNB in an academic, ambulatory clinic from January 2015 to December 2019. pSSNBs were performed in 118 patients whereas dSSNBs were performed in 107 patients. Pain scores were assessed immediately prior, immediately following, and 1-3 months following the injection. Of the 225 patients, 182 attended their follow-up and were included in the analyses. Non-inferiority (one-tailed t-test) was defined as an absolute risk-difference of no more than 5% in a clinically relevant pain reduction at follow-up.

Conclusions: These results suggest that ultrasound-guided dSSNBs are non-inferior to pSSNBs. In fact, they may even be superior to pSSNBs, which may warrant further investigation. This is clinically significant for providers who prefer positioning the patient in the lateral decubitus position. Furthermore, this approach can be helpful in avoiding iatrogenic phrenic nerve involvement or pneumothorax which may occur with pSSNBs.