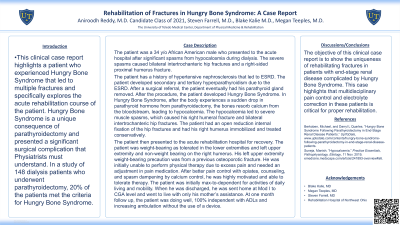 Case Diagnosis: The patient was a 34-year-old African American male who presented to the acute rehabilitation hospital after significant spasms from hypocalcemia that led to bilateral intertrochanteric hip fractures and a right proximal humerus fracture. The patient has a history of ESRD, which caused hyperparathyroidism. The patient had his parathyroid gland removed, and he developed Hungry Bone Syndrome. In Hungry Bone Syndrome, after the parathyroid hormone decreases from parathyroidectomy, the bones resorb calcium from the bloodstream, leading to hypocalcemia. The hypocalcemia then led to severe muscle spasms, which caused his fractures. The patient had an open reduction internal fixation of the hip fractures and had his right humerus immobilized and treated conservatively.

Case Description: This 34-year-old Hungry Bone Syndrome patient presented to the acute rehabilitation hospital for recovery. The patient was weight-bearing as tolerated in the lower extremities and left upper extremity and non-weight bearing on the right humerus. His left upper extremity weight-bearing precautions were from a previous osteoporotic fracture. He was initially unable to perform physical therapy due to excess pain and needed an adjustment in pain medication. After better pain control with a multi-faceted medical approach, counseling, and spasm dampening by calcium control, he was highly motivated and able to tolerate therapy. The patient was initially max-to-dependent for activities of daily living and mobility. He was sent home at Mod I to CGA level and went to live with only his mother's assistance. At one month follow-up, the patient was doing well, 100% independent with ADL's and increasing ambulation without the use of a device.

Discussions: The objective of this clinical case report is to show the uniqueness of rehabilitating fractures in patients with Hungry Bone Syndrome.

Conclusions: This case highlights that a multidisciplinary approach, including pain control and electrolyte correction in these patients, is critical for proper rehabilitation.