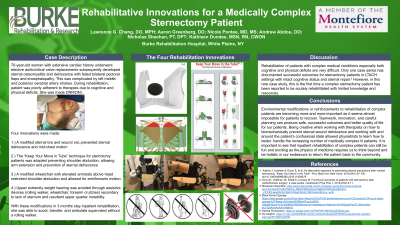 Case Description: 70 year old woman with extensive cardiac history underwent elective aortic/mitral valve replacements subsequently developed sternal osteomyelitis/dehiscence with failed bilateral pectoral flaps and encephalopathy. This was complicated by left middle/posterior cerebral artery strokes. During rehabilitation, patient was poorly adherent to therapies due to cognitive and physical deficits. Four innovations were made: 1.) A modified sternal bra and wound vac prevented sternal dehiscence and mid-chest motion, 2.) the “Keep Your Move in Tube” technique for sternotomy patients was adapted preventing shoulder abduction, allowing arm extension and prevention of sternal dehiscence, 3.) a modified wheelchair with elevated armrests above head restricted shoulder abduction and allowed for arm/forearm motion, and 4.) upper extremity weight bearing was avoided through assistive devices secondary to lack of sternum and resultant upper quarter instability. With these modifications, she was able to scoot, transfer, and ambulate supervised without rolling walker.

Discussions: Rehabilitation of patients with complex medical conditions especially both cognitive and physical deficits are very difficult. Only one case series has documented successful outcomes for sternectomy patients in LTACH settings with intact cognitive status and sternal repair. However, in this rare case study, this is the first time a complex sternectomy patient has been reported to be acutely rehabilitated with limited knowledge and resources.

Conclusions: Environmental modifications or reinforcements to rehabilitation of complex patients are becoming more and more important as it seems almost impossible for patients to recover. Teamwork, innovation, and careful planning can produce safe, successful outcomes and better quality of life for our patients. It is important to see that inpatient rehabilitation of complex patients can still be fun and exciting as the physics of medicine requires us to think beyond and be holistic in our endeavors to return the patient back to the community.