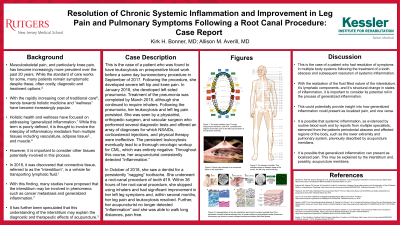 Case Description: Ms. F is a 72 year old female who was incidentally found to have leukocytosis on routine blood work in early 2017. Around this time, she began to notice progressive debilitating left leg pain along with a slight toothache. She was seen by many specialists, including a vascular surgeon and hematologist, who offered an array of diagnoses for which NSAIDs, corticosteroid injections, and physical therapy were ineffective. While imaging of her leg showed no structural pathology, routine blood work continued to show leukocytosis and her acupuncturist consistently detected inflammation as her leg and tooth symptoms persisted. In October of 2018, she was found to have a large periodontal abscess and underwent a root canal procedure of tooth #19. Within 36 hours, Ms. F had complete resolution of her left leg symptoms and, soon after, had complete resolution of her chronic idiopathic leukocytosis. Further, her acupuncturist no longer detected inflammation.

Discussions: This case illustrates a course of puzzling laboratory values in conjunction with seemingly unrelated musculoskeletal symptoms which all resolve following a root canal procedure for a periodontal abscess. It was recently discovered that the interstitium transports lymphatic fluid and is associated with inflammation. This has been proposed as an explanation for phenomena such as cancer metastasis and acupuncture meridians. Further, it should be noted that the meridian associated with tooth #19 includes the left leg.

Conclusions: It is possible that generalized inflammation can present as localized pain. This may be explained by the interstitium and, possibly, acupuncture meridians.