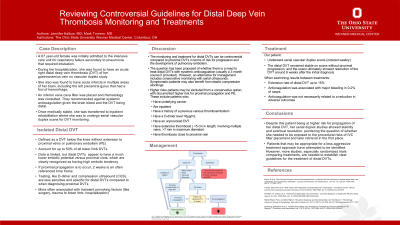 Case Description: A 67 year-old female was initially admitted to the intensive care unit due to acute respiratory failure secondary to pneumonia that required intubation. She was found to have an acute right distal deep vein thrombosis (DVT) on vascular duplex study. During her course, she developed acute infarcts in multiple areas of her brain, including the left precentral gyrus that had foci of hemorrhage. An inferior vena cava filter was placed, and Hematology recommended against anticoagulation given the brain bleed and distal DVT. She was transferred to inpatient rehabilitation where she underwent continued vascular duplex scans which ultimately showed DVT resolution.

Discussions: Distal DVTs are defined as DVTs below the knee, and occur frequently. The monitoring and treatment for distal DVTs can be controversial when compared to proximal DVTs in terms of risk for progression and development of pulmonary embolism. Some alternatives range from conservative clinical monitoring or serial ultrasounds, IVC filter, and/or systemic anticoagulation.

Conclusions: Over a two month course this patient was followed with serial duplex studies for DVT monitoring which portrayed dissolution of the DVT over time, pondering the question of whether she needed the exposed procedural risks of IVC filter placement and later retrieval in the first place. Current updated literature guidelines will be reviewed and discussed regarding monitoring, propagation, and treatment considerations on this controversial topic.