Revisiting Heterotopic Ossification: Prophylaxis and Management in A Young Man 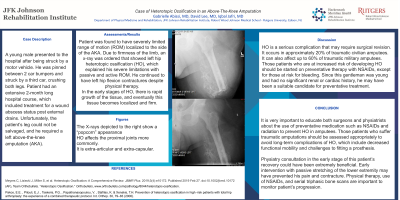 Case Description: A 24-year-old previously healthy male presented to the hospital after being struck by a motor vehicle. He was pinned between 2 car bumpers and struck by a third car, crushing both legs. Patient had an extensive 2-month long hospital course, which included treatment for a wound abscess status post external drains. Unfortunately, the patient’s leg could not be salvaged, and he required a left above-the-knee amputation (AKA). Patient was found to have severely limited range of motion (ROM) localized to the side of the AKA. Due to firmness of the limb, an x-ray was ordered that showed left hip heterotopic ossification (HO), which explained his severe limitations with passive and active ROM. He continued to have left hip extension contractures despite physical therapy, but fortunately qualified for bisphosphonate therapy.

Discussions: HO is a serious complication that can require surgical revision. It occurs in approximately 22.8% of traumatic amputees. Those patients who are at increased risk of developing HO should be started on preventative therapy with NSAIDs, except for those at risk for bleeding. Since this gentleman was young and had no significant renal or cardiac history, he may have been a suitable candidate for preventative treatment of HO.

Conclusions: It is very important to educate both surgeons and physiatrists about the use of preventative medication such as NSAIDs and radiation to prevent HO in amputees. Those patients who have no comorbidities should be assessed appropriately to avoid long-term complications of HO, which include decreased functional mobility and challenges to fitting a prosthesis.