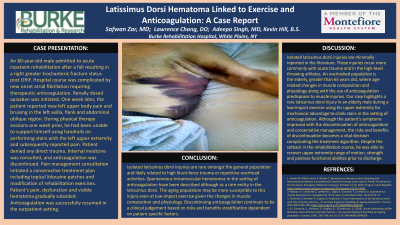 Discussions: Isolated latissimus dorsi injuries are minimally reported with few cases cited in the literature. These injuries occur more commonly with acute trauma and in the high-level throwing athletes. An overlooked population is the elderly, greater than 65 years old, where age-related changes in muscle composition and physiology along with the use of anticoagulation predisposes to muscle injuries. Our case highlights a rare latissimus dorsi injury in an elderly male during low-impact exercise on anticoagulation. Although the patient’s symptoms improved with conservative management, the risks and benefits of discontinuing anticoagulation became a vital decision.

Conclusions: Isolated latissimus dorsi injuries are rare amongst the general population. Spontaneous intramuscular hematomas in the setting of anticoagulation have been described although as a rare entity in the latissimus dorsi. The aging population may be more susceptible to this injury even at low-impact exercise given the changes in muscle composition and physiology. Discontinuing anticoagulation continues to be a clinical judgement based on risks and benefits stratification dependent on patient specific factors.