Role of Radiofrequency Ablation in Chronic Abdominal Pain: An Evidence Based Review 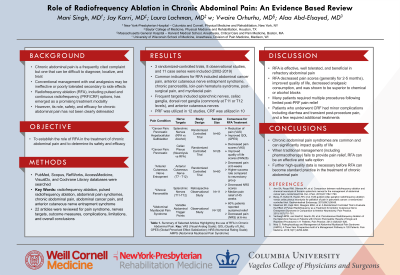 Objectives: Chronic abdominal pain is a frequently cited complaint but can be difficult to diagnose, localize, and treat. Conventional management with oral analgesics may be ineffective or poorly tolerated secondary to side effects. Radiofrequency ablation (RFA), including pulsed and continuous radiofrequency (PRF/CRF) options, has emerged as a promising treatment modality. However, its role, safety, and efficacy for chronic abdominal pain has not been clearly delineated. The objective is to establish the role of RFA in the treatment of chronic abdominal pain and to determine its safety and efficacy.