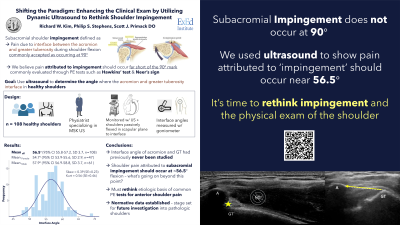 Objectives: The investigators believe subacromial shoulder impingement, defined as the interface between the acromion and greater tuberosity during forward shoulder flexion, occurs far short of the 90-degree mark commonly evaluated through physical exam tests such as Hawkins’ test and Neer’s sign. The goal of this study is to utilize ultrasound to dynamically determine the angle where this interface occurs.

Design: Medical student volunteers were recruited to be scanned by ultrasound. Subjects reporting shoulder pathology and any shoulder found to have pathology on exam were excluded. A single researcher, a physiatrist specializing in musculoskeletal ultrasound, performed measurements for every shoulder. During ultrasound examination, subjects’ shoulders were passively guided into forward flexion, up to the point of interface between the acromion and greater tuberosity of the humerus. A goniometer was used to measure the angles at which this interface occurred.

Conclusions: The interface angle of the acromion and greater tuberosity of the humerus during forward flexion in the scapular plane has never been investigated. This study is the first to establish normative data that may set the stage for future investigations in pathological shoulders. Furthermore, the results bring into question the etiologic basis of common physical exam tests for anterior shoulder pain as the angle of “impingement” interface appears to occur far short of the 90-degree mark.